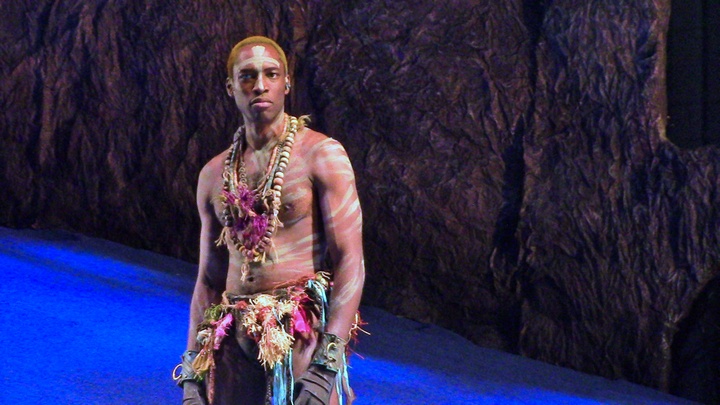 “Libète! Libète!” – Caliban’s joyful words still ring in our ears following the Classical Theatre of Harlem’s The Tempest, directed by Carl Cofield, and made even more powerful by the unique setting in which these words are set, as CTH describes:

Prospero’s magical island could be anywhere. CTH’s production references the enchanting island of Hispaniola, the island that is home to both the Dominican Republic and Haiti. The history of Haiti is nothing short of magical: this tiny Caribbean country won its independence by defeating three European superpowers: France, Britain, and Spain, demonstrating the same fighting spirit found in Caliban, and the same longing for freedom as Ariel. The Tempest highlights the dynamics of freedom and captivity, imprisonment and rebellion, authority and tyranny.

We caught up with Carl Hendrick Louis after the show to discuss his character Caliban, his Haitian heritage, colonialism and the freeing power of speaking in one’s mother tongue.

What does your character, Caliban, symbolize and how do you portray this in your performance?

In this production Caliban symbolizes strength, perseverance, faith, and self-worth.

The basic relationship between Prospero [Ron Cephas Jones] and Caliban is master and servant. In a master-servant relationship, the servant has specific learned behavior that is imposed by the master in order to live in the master’s world. However, my portrayal of a servant consistently broke those specific learned behaviors in front of the master, Prospero, no matter what the outcome would be. Caliban is fearless.

In those attempts, I hoped to convey Caliban’s strength, perseverance, faith, and self-worth.

How does this production resonate with you, being set in Haiti/DR?

It resonates immensely because I’m Haitian. Haitians have experienced a great deal of oppression from their “masters” or dictators throughout the history of Haiti. And Caliban is wonderful in this production, because he lets us see what happens when a Haitian, or any native of any country, has had enough of being ruled by an individual who is not from their land.

Playing Caliban through the idea of colonization gave me a deeper understanding of what Toussaint Louverture experienced. Toussaint was once a slave himself before he became a leader and led Haiti to its independence.

In what ways did the director highlight the colonial interpretations of the play?

I cannot speak for him, but he made it clear to us, the actors, that there were two groups of people co-existing in this world: the people who were native to the land and the people who were foreigners to the land. This leaves us, the actors, with the thought of how did foreigners and natives exist with one another during the Colonial Era. It poses lots of questions and ideas for us to work with.

What lines are spoken in Kreyol and why?

First, the lines that were spoken in Kreyol were the exact Shakepeare lines from the text, we just translated it to Kreyol. We also chose to speak Kreyol because it helped to give the world specificity.

What was really important to me was when Caliban decided to speak in Kreyol. There’s a moment in the play where Caliban meets two foreigners who become his companions, Stephano [Emmanuel Brown] and Trinculo [Anthony Merchant], and eventually they decide to help him break free from his tyrant, Prospero. That is a crucial moment, because in the moment when they agree to join him, that is a big step towards freedom in Caliban’s mind. It is a step towards reclaiming something that was always his in the first place. He has two friends! He’s never had friends before in his life! It’s the first time Caliban is overwhelmed with a great deal of joy in a long time and because of that feeling he is moved to speak in his mother tongue and that within itself is freeing.

‘Literally my partners in crime. Plus they are funny!’

Anthony Merchant and Emmanuel Brown are literally my partners in crime. Plus they are funny! You try not laughing while you're on stage with them. "PLAYtime is NOW" – CHL